Kuan Yin is the Chinese Goddess of Mercy. She represents the virtues of compassion, mercy, forgiveness and faith. "She is the essence of mercy and
compassion and is quick to answer pleas from her devotees for help(1)." Her name, Kuan Yin, means "the one who hears the cries of the world(1)."
Kuan Yin can be called upon when you are in danger. It is said that if you are in danger and you "concentrate on the powers of Kuan Yin," you will be
saved. Another way in which Kuan Yin can help those in need is if your are in want of a child. If you pray to Kuan Yin for a child she will grant your wish.
Kuan yin has not always been worshiped as a women. Kuan Yin is considered to be the feminine form of the Indian Bodhisattva of compassion,
Avalokitesvara, which is a male.(1) In the Sutra of the Lotus of the Wondrous Law, more commonly known as the Lotus Sutra, which is a Buddhist text written
in Sanskrit, is a description of the Bodhisattva Avalokitesvara. It says that his name means "the Lord who Regards the Cries of the World".(2)
In the Lotus Sutra, when translated into Chinese, the title Avalokitesvara becomes Kuan Shih Yin(2). There is still a lot of debate by Chinese scholars as
to when Kuan Yin made the transition from male to female. From the 1st century AD to the early 8th century AD Kuan Yin was portrayed as a male. Around the mid 9th century statues of Kuan Yin began appearing as statues that were distinctly
female(2).
Kuan Yin is not generally regarded as a goddess, but rather a Bodhisattva. A Bodhisattva, "is a being destined for full enlightenment and nirvana who, out
of compassion for the suffering of other beings, has taken a vow to postpone his or her entry into nirvana in order to remain in the world to help other beings(1)."

There are many poems about how Kuan Yin looks and helps her followers. The following poem describes the many different ways she is seen.
A mind perfected in the four virtues,
A gold body filled with wisdom,
Fringes of dangling pearls and jade,
Scented bracelets set with lustrous treasures,
Dark hair piled smoothly in a coiled-dragon bun,
And elegant sashes lightly fluttering as phoenix quills, Her green jade buttons
And white silk robe
Bathed in holy light;
Her velvet skirt
And golden cords
Wrapped by hallowed air,
With brows of new moon shape
And eyes like two bright stars,
Her jadelike face beams of natural joy,
And her ruddy lips seem a flash of red.
Her immaculate vase overflows with nectar from year to year,
Holding sprigs of weeping willow green from age to age.
She disperses the eight woes;
She redeems the multitude;
She has great compassion;
Thus she rules on the T'ai Mountain,
And loves at the South Sea .
She saves the poor, searching for their voices,
Ever heedful and solicitous,
Ever wise and efficacious.
Her orchid heart delights in green bamboos;
Her chaste nature loves the wisteria.
She is the merciful ruler of Potalaka Mountain,
The Living Kuan Yin from the Cave of Tidal Sound.

Kuan Yin has many different forms, she is shown dressed in white, while holding a willow branch, or she is shown with a thousand arms and a thousand
eyes. She is also sometimes shown with swirling waters, leaping fish, and placid seas at her feet. She is also shown with a peacock, and with armor.
She is shown draped in white. Her head is covered in a cloak that hits the ground, covering her completely. In one hand she holds a rosary, and in the
other she holds a vase. The vase represents the compassion she pours out for all her followers(2). She is sometimes shown with
children all around her. She is known as the goddess who brings children and if anyone is having trouble becoming pregnant they can pray to her and they will become pregnant.
In some statues of Kuan Yin she is shown holding a willow branch. The willow branch symbolizes her compassionate concern for the people of the world. The willow is also an ancient Chinese symbol of femininity. Kuan Yin is also pictured with one thousand arms and eyes. This signifies her all encompassing compassion for the world and her constant gaze upon the suffering. Another reason she is pictured with a thousand arms and eyes is because in the legend of Miao Shan she helps her father by giving him her arms and eyes, and in return she was given a thousand arms and eyes.
A peacock is pictured with Kuan Yin to show her role as a protector of all creatures. Kuan Yin is also shown with armor all around her while holding a bow
and arrow this again is a sign of her protectiveness.
There are many different legends that pertain to Kuan Yin. The legend of Miao Shan is a story which emphasizes Kuan Yin's image as a female
Bodhisattva. The legend goes as follows:
"Centuries ago in a kingdom bordering Myanmar and perhaps India, there lived a young princess
by the name of Miao Shan. She was the youngest of three daughters. Unlike her sisters, she
spurned the frivolous pursuits of children and the riches of the court. She devoted her time to
meditation and the teachings of Buddha.
Their father, King Miao Chung had no heirs, so he wanted his daughters to marry and the
husband of greatest worth shall have the throne. All married, except Miao Shan. Only she
refused. All she wanted was to attain perfection under the teachings of Buddha and ""heal
humanity of all its ills, equalize all the classes, put the rich and the poor on equal footing, to have
a community of good without distinction of persons"". I will only marry a physician.
In a rage, her father sent her to a nunnery. Day and night, she was put to the most menial of
tasks. Miao Chung sought to break her spirit. Miao Shan was adamant. Not only did she work
without a word of complaint but she also had the help of the Gods and animals. Discovering this,
the King had the nunnery burnt down. She was taken to the palace to be executed.
Many ways they tried, all failed. Finally, her father strangled Miao Shan with a silk cord. Just
then, the Earth God, in the form of a tiger, leaped into the courtyard and carried her body away.
She was taken to hell. The rulers of the underworld were curious of this mortal of such purity.
They to hear her prayers for it is said all that hears it will be at peace. The spirit of Miao Shan
began to pray and all about her started to transform into a Paradise of Joy. Quickly a memorial
was sent to Heaven. ""There must always be a Heaven and a Hell. This is the Law for only when
there are both there can be Justice. Send this soul back to Earth. No longer shall she stay in
Hell, lest all of Hell become as Heaven.""
She was then returned to life to the Island of P''u T''o by the Buddha of the West. There she
stayed, seeking perfection. Through all her ordeals, she was never angry with her father, only
hoped that he will one day understand.
Years later, word got to the Island of P''u T''o that King Miao Chung was struck with a mortal
illness. Only the eye and hand of the ""one without angry one"". Hearing this, Miao Chung
allowed her eye to be gouged and her arm cut off. When the King was recovered and realized
that it was his daughter that he owed his life to was full of remorse. Weeping over her body, he
begged his daughter for forgiveness.
In that moment, the air was filled with a wonderful fragrance and the sky rained flowers. Miao
Shan was revealed as the thousand eye and arms Kuan Yin. Hovering over her parents, she
bade them to rule justly under the precepts of Buddha.
The King returned to his kingdom. Then, started an age of justice and peace. The King ruled with
compassion and mercy. When he died, it was said that the Heavens opened and Kuan Yin
welcomed her father home(4)."
Kuan Yin is the most cherished Chinese diety. If ever you are in trouble just remember to think of her and she will help. 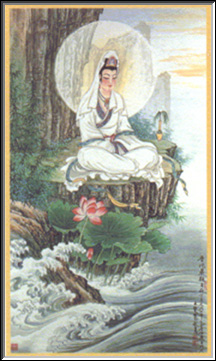