The Tao is near but people seek afar.
Things are easy, but people seek what's difficult.
People who study the Buddhadharma shouldn't hurt for bargains. That is what worldly people do they're always looking for the easy way out. But people who study the Buddhadharma should act in exactly the opposite way. Don't always be looking for a bargain. The more you try to get off easy, the bigger will be the loss you take. What kind of big loss will you take? You will make mistakes in cause and effect and thereby fall into the hells.
Just now, someone asked me, "Is it good to eat meat or not good to eat meat?" I said, "There is good in eating meat and there is not good in eating meat." What's the good about eating meat? Well, "It's delicious and nutritious, too," you think. And why is meat-eating not good? The worst thing about it that's not good is that after you digest it, it smells worse than any other type of food, It makes your body stink.
Second is that you also form a company with whatever kind of meat you eat. Cows set up condi­tions with cows, pigs congregate with other pigs --you form a big corporation with whatever type of animal you eat. For example, if you eat a lot of pork, you'll become tied up into a company of pigs. So, you figure it out: in the future will you or will you not have to become a pig? The same applies to cows, chickens, sheep, fish and so forth, You get involved in the karma that those creatures create when you eat their meat; you get all mixed up together with them. The karma you create as a person gets all mixed up with the pig, and the karma the pig creates gets all mixed up with you. In a few years you have a big corporation on your hands. And so obviously the next step that follows is that you will eventually become the type of animal whose flesh you were most fond of eating. If you ate pig meat, you will have to become a pig. If you ate cow meat, you will have to become a cow. And it won't be a simple matter of replacing the meat you ate. True enough, you will have to pay that back, but not as a person--you yourself will have to become a cow, you'll have to be a pig, in order to pay back those debts.
I also say that people who eat meat take a loss after they die, while people who don't eat meat take a loss while they are still alive. What do I mean by that? If you don't eat meat, you miss out on delicious flavors, and the food you eat is probably quite bland and not so exciting. But if you take this little bit of loss while you are still alive, when you die you won't have to become a pig, or a cow, or a sheep, and you won't have to fall into the hells.
To sum it up, there's a saying:
To endure suffering is to end suffering;
To spend blessings is to end blessing.
If you remember those two lines, that'll be good enough.
I notice that there are some among you who still have doubts about the principles I just ex­pounded. You don't believe that if people eat pork they will eventually have to become pigs, and if people eat beef they will have to become cows. "I don't believe that principle," you say. Well, not to talk about pigs and cows, let's Just talk about onions and garlic. When you eat them your entire body reeks of onions and garlic. And if it's that way with onions and garlic, obviously it's the same way with meat. Of course, we do form a company with whatever we eat. Whether you believe it or not, I leave it up to you. Americans like to eat American onions, and so just about every American smells like onions and garlic. They also smell like bread, butter, and cheese, because that is their daily fare. If you don't believe it, take a sniff--go grab the arm of an American and see what they smell like. You will find what I have just said to be true. 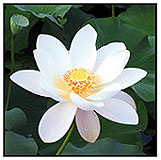